We are here in Nigeria

The ongoing humanitarian disaster in the northeast of Nigeria has forced over 2 million people to take flight. They are fleeing the Islamic extremism of Boko Haram. The media is not paying much attention to their plight, but the needs of the Nigerian people are great. We are here – in Nigeria.

Relief aid in a terrorised nation

Boko Haram is best known for its attacks on churches and markets and for the large-scale abduction of schoolgirls. Since the group radicalised in 2009, they have killed tens of thousands of people, thus becoming one of the most violent terrorist groups in the world. The large numbers of displaced persons present an enormous challenge for the cities.

ZOA has been working in Nigeria since 2016 in Borno State, Jere and Maffa Local Government Areas (LGA) and Monguno Local Government Area (LGA). We reach out to the most vulnerable internally displaced people as well as to the host population who shared the little they had with new arrivals. We provide clean drinking water, sanitary facilities, cash, and food.

ZOA supports people through monthly cash assistance projects in Monguno and Jere. At least 80 per cent of cash is spent on food. The selected households who were eligible for the cash distributions are the most vulnerable like female headed families, pregnant and lactating mothers and elderly households. They generally have no resources left and had to use negative coping strategies such as survival sex, begging, eating fewer meals per day and generating large debts with friends and family. As a result of ZOA’s intervention, malnutrition percentages dropped, people became more food secure and women and girls are less vulnerable to violence and sexual exploitation. Despite warnings for famine this worst-case scenario was prevented in the project areas. The cash was distributed through RedRose digital platform, an innovative system making use of e-cards and/or e-vouchers (bank cards) and biometric authentication.

The impact of our work in Nigeria in 2020

Water and sanitation in overcrowded camps

ZOA also responds quickly to the high WASH (water, sanitation and hygiene) needs in camps and communities. ZOA has a water and sanitation programme constructing waterpoints and latrines, combined with hygiene education. Since March 2020 special attention is being given to coronavirus awareness and prevention measures. This includes distribution of soap. If necessary, ZOA responds quickly to cholera outbreaks in its target areas. Due to over-congestion in camps for internally displaced people (IDPs), cholera spreads quickly during rainy season. ZOA coordinates the response in the Jere area and distributes soap and dehydration/water tablets. ZOA staff chlorinates waterpoints and hold hygiene campaigns to prevent spreading of cholera. As a result, cholera stays under control in ZOA’s target area.

We work with other humanitarian partners in the Dutch Relief Alliance (DRA), the consortium is called Nigeria Joint Response. With LHI, a local NGO, ZOA prepares a livelihood project to help women with setting up income generating activities. Our work is funded by the Dutch Ministry of Foreign Affairs, World Renew, Canadian Food Grains Bank, UNOCHA through the Nigeria Humanitarian Fund and ZOA Netherlands. 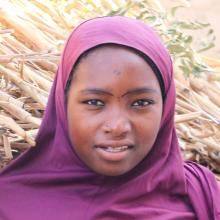 I had to run for my life. Now I live here, in this refugee camp. I'd rather go back to my village, but that is not possible. I am too scared.